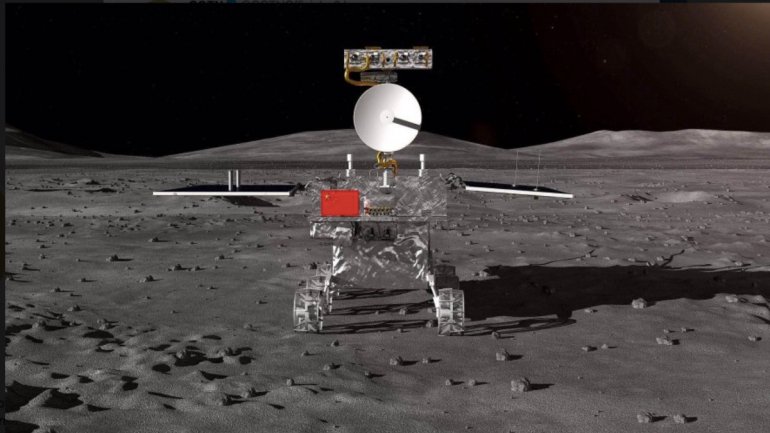 A Chinese spacecraft has made the first successful landing ever on the far side of the moon, a mission seen as an important step as the country looks to push forward its space programme.

The lunar explorer Chang’e 4 touched down at 10:26 am and relayed a photo of the “dark side” of the moon to the Queqiao satellite, the official China Central Television reported on Thursday.

The moon is tidally locked to Earth, rotating at the same rate that it orbits our planet, so the far side – or the “dark side” – is never visible from Earth. Previous spacecraft have seen the far side of the moon, but none has landed on it.

The landing “lifted the mysterious veil” from the far side of the moon, and “opened a new chapter in human lunar exploration”, the broadcaster said.

China launched the Chang’e-4 probe earlier this month, carried by a Long March-3B rocket. It includes a lander and a rover to explore the surface of the moon.

“The far side of the moon is a rare quiet place that is free from interference of radio signals from Earth,” mission spokesman Yu Guobin said, according to Xinhua. “This probe can fill the gap of low-frequency observation in radio astronomy and will provide important information for studying the origin of stars and nebula evolution.”

Unlike the near side of the moon that offers many flat areas to touch down on, the far side is mountainous and rugged.

The tasks of the Chang’e-4 include astronomical observation, surveying the moon’s terrain, landform and mineral composition, and measuring the neutron radiation and neutral atoms to study the environment on the far side of the moon.

China aims to catch up with Russia and the United States to become a major space power by 2030. It is planning to launch construction of its own manned space station next year.

However, while China has insisted its ambitions are purely peaceful, the US Defence Department has accused it of pursuing activities aimed at preventing other nations from using space-based assets during a crisis.

Apart from its civilian ambitions, Beijing has tested anti-satellite missiles and the US Congress has banned Nasa from bilateral cooperation with its Chinese counterpart due to security concerns.

The United States is so far the only country to have landed humans on the moon. US President Donald Trump said in 2017 he wants to return astronauts to the lunar surface and establish a foundation there for an eventual mission to Mars.

It was not until 1959 that the Soviet Union captured the first images of the moon’s mysterious and heavily cratered “dark side”.

No lander or rover has ever previously touched the surface there, and it is no easy technological feat – China has been preparing for this moment for years.

A major challenge for such a mission was communicating with the robotic lander: as there is no direct “line of sight” for signals to the far side of the moon.

As a solution, China in May blasted the Queqiao (“Magpie Bridge”) satellite into the moon’s orbit, positioning it at a ‘Lagrange point’ so that it can relay data and commands between the lander and Earth.

A Lagrange point is a location in space where the combined gravitational forces of two large bodies, such as Earth and the sun or Earth and the moon, equal the centrifugal force felt by a much smaller third body. The interaction of the forces creates a point of equilibrium where a spacecraft may be “parked” to make observations.

In another extreme hurdle, during the lunar night – which lasts 14 Earth days – temperatures drop to as low as minus 173 degrees Celsius (minus 279 Fahrenheit).

The rover’s instruments have to withstand those fluctuations and it has to generate enough energy to sustain it during the long night.

China plans to send its Chang’e 5 probe to the moon next year and have it return to Earth with samples – the first time that will have been done since 1976.